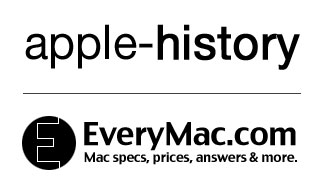 For those interested in visiting Apple-History -- Glen Sanford's great Apple Computer history website -- it is available at Apple-History.com. Apple-History covers Apple company history through 2004; the site last was updated in 2015.

You also may enjoy EveryMac.com. Established in 1996 and updated frequently, EveryMac.com has a Mac History feature, as well as Apple specs, prices, answers, and more.

If you would like to take a deep dive into the history of Apple, Inc, these classic books -- available in hardback, paperback, ebook, and audiobook formats -- are must haves, as well:

With these books in your physical or digital library, you definitely can be quite knowledgeable about Apple's history. Hope these selections are useful to you.